However, auto-levelling is often a bit off due to various factors that influence the camera magnetic sensors. Plus, even if you shoot panoramas using a tripod, they may end up tilted if the ground under the tripod is not perfectly flat or if it is soft, like grass or a carpet.

Fortunately, the Kuula editor has a very simple tool to fix that issue. You can see it in action in this video and read details on how to use it below:

Level correction on a panoramic image

The Level Correction function is a simple slider. You can find it at the bottom of the editor, as shown below (1). 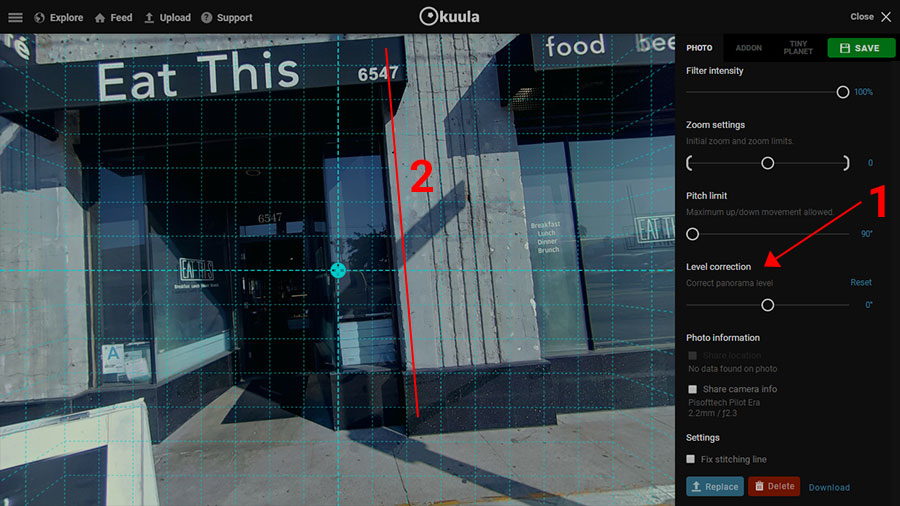 In order to fix the panorama level, drag the slider left or right. As soon as you start dragging it, a grid will appear to help you align the photo.

The most effective way to level an image is to find vertical lines and align them to the grid instead of the horizontal ones (2).

Typically one adjustment should be enough, but sometimes as you rotate the photo around, you may notice that it's still a bit off. In this case you can use the slider to adjust the level again (and again) until you are satisfied. After each adjustment, the slider goes back to its initial position and the changes are applied to the image.

You can use the Reset button on the right side to clear all corrections and restore the panorama level to its original state.

After you are satisfied with the result, hit SAVE and you can exit the editor.